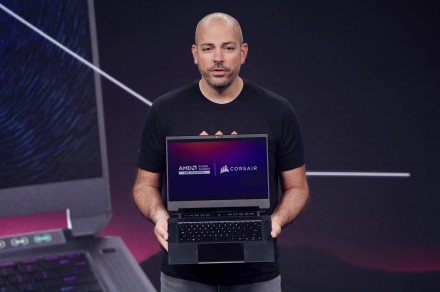 Posted By: adminon: May 23, 2022In: TechnologyNo Comments
Print Email

Corsair launched its first gaming laptop ever during AMD’s Computex 2022 keynote. The machine, called Voyager, is launching exclusively with AMD hardware. It also has a few unique touches that make it “the first laptop ever designed to be a truly mobile streaming solution,” according to AMD’s Frank Azor.

Those additions include a 10-key streaming command center at the hinge of the notebook and a Full HD webcam. Both are bolstered by two key pieces of Elgato software: Stream Deck for the command center, and Camera Hub for the webcam, which allows you to adjust field of view, change video inputs, and tweak the look of your video.

The Corsair Voyager is part of the AMD Advantage program under the hood, so it’s equipped exclusively with a Ryzen CPU and Radeon GPU. AMD didn’t mention specifics during its Computex presentation, but it said the machine will launch with the latest generations for both parts. A leak from earlier in May referenced a Corsair laptop with a Ryzen 9 6900HX and Radeon RX 6800M, which may be the flagship configuration for the Voyager.

In addition, the machine comes equipped with Corsair DDR5 memory, as well as a 16-inch 240Hz 1440p display with FreeSync Premium support.

As part of the AMD Advantage program, the Voyager has access to a suite of AMD Smart technologies, including SmartShift and Smart Access Memory. It will also have access to the newly-announced Smart Access Storage. This technology enables Microsoft’s DirectStorage API on AMD Advantage laptops, helping boost loading times in supported games.

We don’t know much about Smart Access Memory now, but AMD says to expect more news in the coming months. AMD says it allows the GPU to decompress game assets instead of putting that work on the CPU, which should improve loading times. We’ve already seen this type of technology at work in Forspoken, which could be capable of loading in less than a second.

The Corsair Voyager will be available this summer, both in preconfigured models and customizable versions available through Origin PC. We don’t have word on pricing yet, but with a Touch Bar-esque streaming…