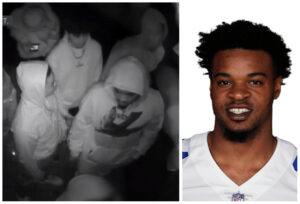 Dallas Cowboys cornerback Kelvin Joseph was cleared of criminal wrongdoing while a passenger in a vehicle with two men who killed another man earlier this year.

According to The Dallas Morning News the NFL player, who was under suspicion for a murder that took place on March 18, “has been cleared” of any criminal wrongdoing.

Although Joseph had never been arrested nor charged, he was a passenger in the car that was involved in a drive-by shooting. He fully cooperated. The two men, Tivione English, 21, and Aries Jones, 28, who are accused of killing 20-year-old Cameron Ray, are currently in jail on murder charges. The pair is accused of shooting Ray from a black SUV as Joseph rode with them on March 18.

Now that Joseph has been cleared, he is expected to travel with the Cowboys to training camp in Oxnard, California.

On April 15, Joseph’s attorney, Barry Sorrel, stated, “Kelvin Joseph did not shoot Cameron Ray. Mr. Ray’s death is a tragedy, and Kelvin extends his deepest condolences for the family’s loss. On the night of March 17, Kelvin was unarmed and was not looking for violence. He found himself in a situation that escalated without his knowledge or consent.”

“Along with condolences to the Ray family, Kelvin apologizes to the Dallas community for being anywhere near this type of incident. The investigation is ongoing, and we intend to respect the process.”

Yahoo Sports reported that the cornerback is expected to report to the team and be available for the start of training camp in Oxnard. A league source stated that the NFL is still scrutinizing Joseph’s cooperation with the Dallas police department. The police department questioned him in April about a month after it was discovered that he knew the suspects who killed Ray. He was seen with them outside the OT Tavern in East Dallas.

There is high speculation that Joseph may be a key contributor to the Dallas Cowboys this season. He was a second-round pick out of Kentucky for the Cowboys in the 2021 NFL draft. He played in 10 games last season.