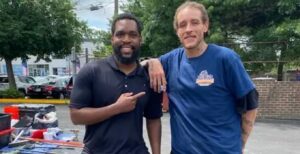 Former NBA star Delonte West has secured a job after he was spotted panhandling on the Richmond highway in Virginia two weeks ago, in a video spread on social media where a fan pulled up to greet the basketball veteran.

“It is what it is,” he said. “I got children. I’m in between jobs. People can help me as much as they can, but you know, as a man I gotta do what I gotta do for my babies.”

Now, thanks to a local car dealership in Alexandria who saw the video, the former point guard has been employed by a flooring company that was doing work for the show room.

According to TMZ, the video of West landed on the radar of Beyer Subaru and they decided they would help the former athlete get back on his feet.

The Beyer Subaru team asked a flooring company they had contracted if there were any available positions for West, which they were delighted to have.

West has reportedly been working for the company since Wednesday, and both the employer and employee are happy with the appointment.

Per the outlet, the 38-year-old is grateful and very polite at his new job, recounting stories and striking up conversations with the entire crew.

West has publicly struggled with mental health disorders and substance abuse. In the fall of 2020, he was diagnosed with bipolar disorder, amid his battle with drugs and homelessness.

With the help of Dallas Mavericks owner Mark Cuban, he entered rehab and was seemingly on the road to recovery after Cuban posted a photograph update of a healthier-looking West. In October 2021, the troubled player relapsed and was taken into custody outside a Florida police department, reports the New York Post.

As previously reported, this past year, he also attempted to join the BIG3, a 3-on-3 pro basketball league founded by rapper and actor Ice Cube. But the aspiring coach did not make the cut. West remains thankful.