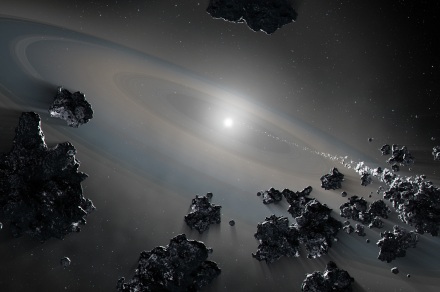 When stars run out of fuel and come to the end of their lives, the biggest ones explode in huge supernovas. But smaller stars go through a different change in which they throw off portions of their mass, creating a planetary nebula around them and leaving a small, dense core called a white dwarf. Like the majority of stars, our sun will eventually become a white dwarf, glowing with residual heat but no longer producing energy through fusion.

Even though it is no longer active in terms of fusion, a white dwarf is still a formidable beast. Because the remnant of the star collapses down to a small core it is extremely dense, and the gravity of this core can wreak havoc on the objects around it. Recently, the Hubble Space Telescope uncovered a case of cosmic cannibalism, with a white dwarf consuming rocky and icy material from its surrounding environment.

This illustration shows a white dwarf star siphoning off debris from shattered objects in a planetary system. The Hubble Space Telescope detects the spectral signature of the vaporized debris that revealed a combination of rocky-metallic and icy material, the ingredients of planets. The findings help describe the violent nature of evolved planetary systems and the composition of their disintegrating bodies. NASA, ESA, Joseph Olmsted (STScI)

The white dwarf, called G238-44, is the first one that has been observed accreting both rocky-metallic material and icy material, which is important as these are the key components from which planets are formed. Studying this white dwarf could therefore help researchers to learn about how planetary systems form.

Scientists know that when stars puff up to become red giants before shedding their mass and becoming white dwarfs, they dramatically impact any planets in their vicinity. And because the white dwarf studied by Hubble is pulling in matter related to planetary formation, including elements like nitrogen, oxygen, magnesium, silicon, and iron, the researchers can observe the mix of elements that would have gone into planets when they first formed.

In addition, the fact that the white dwarf is attracting icy bodies…