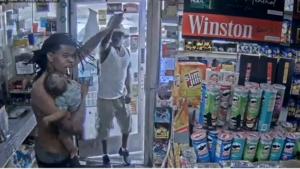 On Father’s Day, a Michigan man fought off a gunman while holding his seven-month-old baby, and it was all caught on surveillance video.

WXYZ reported that the frightening assault took place just before 6 pm Sunday, June 19 at the Valero gas station on Detroit’s west side. The video shows a 25-year-old father and his baby in the store when an assailant approaches the gas station in a white tank top, tan bucket hat, and long khaki shorts.

It appeared that the gunman’s pistol jammed or malfunctioned, so the quick-thinking Dad took the opportunity to use his left hand to push the gunman outside and lock the door, police said. The baby, untouched, seemed to still be fast asleep.

“It’s just upsetting. It’s difficult to watch. I mean, it’s just no regard for human life or for the life of a child,” said Detroit Police Commander Michael Chambers.

According to the gas station attendant, Adam Albarmaki, the father came running inside seeking somewhere to hide. But the gunman followed him. Police said the men had some sort of dispute prior to the gunman’s intent to open fire in the gas station, according to ABC 7 Chicago.

“He had accounted this individual [and it] appears they had some type of argument unknown at this time, we still are early in the investigation and trying to work backward,” Cmdr. Chambers said.

Before the police arrived, the gunman walked away from the scene. The father and baby are both safe. Police took a person of interest into custody just a few blocks away from the gas station.

A search warrant was obtained to look in a home for the firearm used in the felonious assault, according to police.

“We are asking that the public, if they are able to or they know this individual, to call a 1-900-SPEAK-UP,” Cmdr. Chambers said.