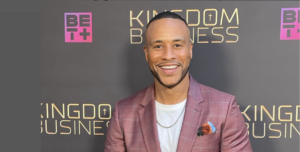 The 44-year-old posted the news on his Instagram and admitted he intended to say no to the gig because he felt “shame” and believed he was a “failure” due to the dissolution of his marriage to actress Meagan Good. However, Franklin explained in his caption that he pushed back on the idea because of the need to help others, “Everything I’ve been through, I was able to draw upon to help a couple successfully sort through their issues (you’ll have to watch to find out which couple),” he teased.

As Franklin disclosed to his fans that he signed on to the 15th season of MAFS before he filed for divorce from Good in December 2021, and the show’s producers said to him, “that didn’t matter to them because they still felt like I could help their couples.”

“I was going to tell them ‘No’ because I felt shame and that voice in my head said, ‘you’re a failure, how can you help anybody save their marriage when yours didn’t work out,’” Franklin wrote.

“That voice in my head also had me thinking about what would ‘people’ say? Would’ people’ approve or disapprove? And then I had to ask myself: Is this how I’m going to live the rest of my life? In fear about what ‘people’ say? And who are ‘people’ anyway? So I went back to the @mafslifetime team and told them YES, I’ll still come. I REFUSE TO LIVE IN FEAR OR SHAME!

According to legal documents, Franklin cited “irreconcilable differences” as the cause for the separation on August 21, 2021. The respected Hollywood producer and actress were often referred to as couple goals, met on the set of their 2011 movie, Jumping the Broom, and were married on June 16, 2012, although they share no children.

In January, Good, 40, dialogued with xoNecole during a Twitter Spaces conversation as she…