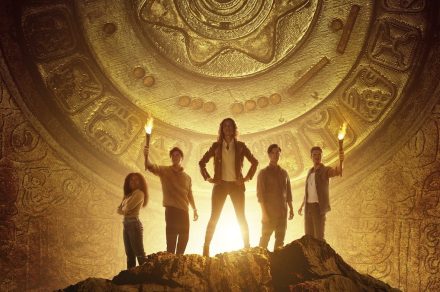 Disney+ revealed the first look at the new streaming serie, National Treasure: Edge of History at the 2022 San Diego Comic-Con. The streamer released a teaser trailer and a behind-the-scenes featurette that highlight the newest treasure hunter, Jess Morales.

Lisette Olivera stars as Jess, a resourceful and insightful dreamer who sets off on an adventure to find and save a lost Pan-American treasure. Starring alongside Olivera are Zuri Reed, Antonio Cipriano, Jordan Rodrigues, Jake Austin Walker, Lyndon Smith, and Catherine Zeta-Jones. Justin Bartha will guest star and reprise his role as Riley Poole. Also, it was announced that Harvey Keitel will join the series as a guest star and reprise his role as FBI Special Agent Peter Sadusky.

The series is based on the National Treasure film series starring Nicholas Cage as Benjamin Gates, the crafty treasure hunter who unearthed some of the world’s greatest valuables. In the first film, Gates discovered a map on the back of the Declaration of Independence, which led him to one of the world’s greatest treasures underneath Trinity Church in New York City. In the second film, Gates used the Book of Secrets to prove the innocence of his great-great-grandfather and find the city of gold inside Mount Rushmore. As of now, Cage is not scheduled to appear in the series.

There is no official date as to when National Treasure: Edge of History will stream on Disney+.