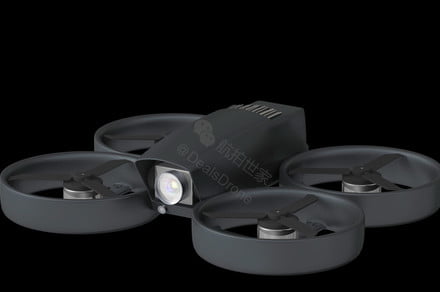 DJI may be prepping launch of Cinewhoop-style drone

Just days after DJI unveiled its revamped Mini drone in the form of the Mini 3 Pro, news has dropped that the company could be about to release its second FPV (first-person view) drone, only this one looks to be even smaller and designed to fly indoors.

The news comes via two sources with a decent reputation for getting it right with DJI-related rumors.

OsitaLV suggested the upcoming device will be a “mini FPV drone” called “Avata,” geared toward aerial photography rather than racing.

The leaker also posted an image that appeared to show the Avata’s model number as WM169, just one digit below the WM170 model number linked to DJI’s FPV quadcopter.

The other leaker, DealsDrone, posted what appear to be renderings (below) of the rumored device showing a Cinewhoop-style quadcopter.

Cinewhoops are diminutive, zippy, and highly versatile FPV drones designed specifically for capturing stable, high-definition video. Ideal for flying indoors and through tight spaces, such a device was used to capture the incredible bowling alley video that went viral last year. As the images show, the so-called Avata drone includes cages that protect the propellers, another common feature of Cinewhoop drones.

Avata is compact and weighs about 500g
Can fly indoors
The photo quality is much better (guess that the Mini 3 Pro is the same)
Greatly improved battery life
Manual mode is not supported
Head chase mode
Vibration function
Touchpad for glasses menu
Glasses can connect to phone pic.twitter.com/WUqpjXXEnK

DealsDrone also suggested that the device weighs around 500 grams and features similar image quality to that of the recently released Mini 3 Pro drone. However, the leaker said it would not feature manual mode, which seems like a curious omission for an FPV drone as it would prevent the pilot from flying the machine with complete freedom.

DealsDrone added that DJI could unveil the quadcopter in July or August this year, but there was no information on pricing.

While many pilots construct their own Cinewhoops from parts, DJI could be looking to launch such a drone…