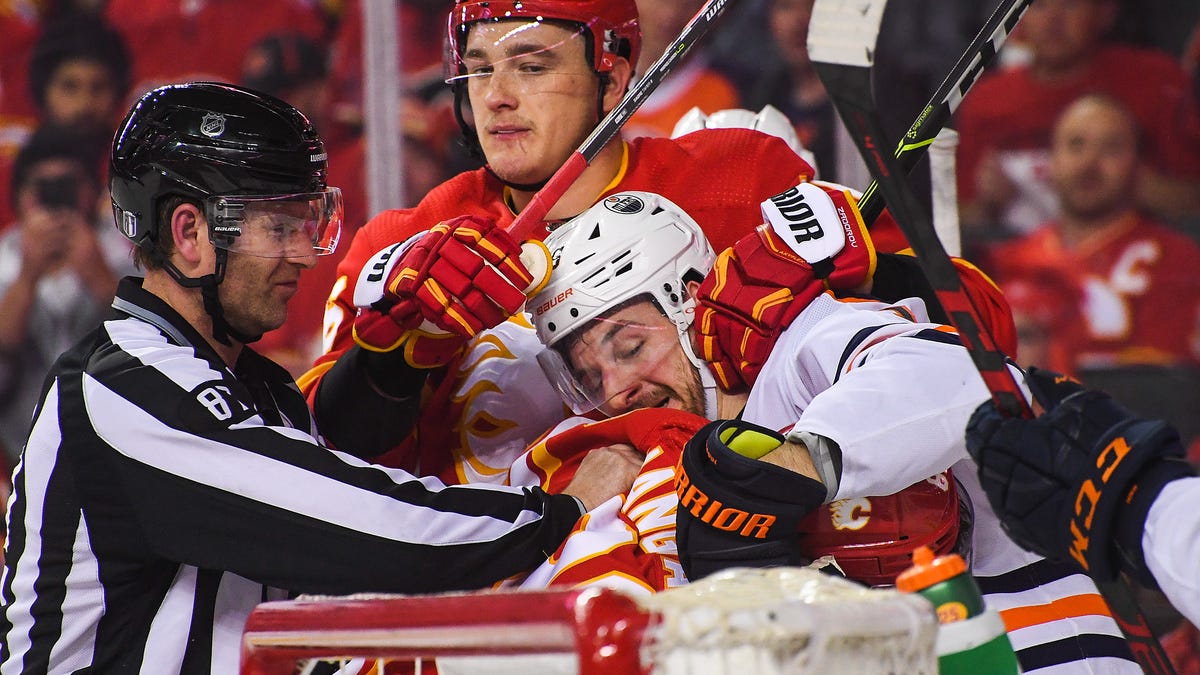 Andrew Mangiapane and Zach Hyman each got roughing penalties for this scrum.Image: Getty Images

It’s tempting to try to glean some kind of lesson from big games. We all try to do it, all the time, just as fans. The playoffs are not all that different from the final few episodes of a prestige television series’ season. You know there’s not much left, and you’re looking for any clues you can get about how it’s going to turn out.

Sometimes, it’s a reasonable endeavor, such as looking at the Rangers-Hurricanes series, seeing New York not having scored since 7:07 of the first period of Game 1, and, it’s like, well, there’s your problem, of course it’s a 2-0 Carolina lead.

And then you have the Battle of Alberta, the hotly anticipated, first-time-in-31-years playoff meeting between the Oilers and Flames, now tied 1-1 after 9-6 and 5-3 games. It doesn’t really matter who won which, unless you believe in momentum, in which case Edmonton did come back from a two-goal deficit, staring a two-game deficit in the face, to win Friday night’s Game 2 in Calgary.

But you’re not going to really learn anything from what happened. There’s no big strategic adjustments to make heading into Game 3. There’s five guys in this series who scored 40-plus goals this season, and a whole lot of suspect defense and goaltending. One team is gonna score a whole bunch of goals and win. Could be either one.

Friday night, it looked like it might be the Flames, as even though they’d squandered the lead and found themselves tied in the third period, Calgary did get a power play with 9:58 left on a useless slash by Warren Foegele. Instead, just 12 seconds later, Zach Hyman turned the series on its head.

Leon Draisatl and Duncan Keith each had a goal and two assists. Connor McDavid had a goal and an assist, becoming the first player to reach 20 playoff points in 9 games since Mario Lemieux in 1992.

While we might not have gotten any fresh knowledge out of the first two games of Oilers-Flames, we have gotten a ton of entertainment, and reminders of some of life’s great joys – and not just high-scoring hockey.