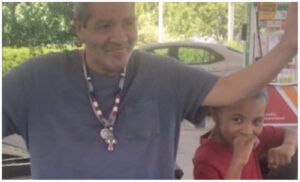 An eight-year-old boy is being credited with saving his grandfather’s life in Greensboro, N.C., according to a report from WFMY News2.

Christian Matos was swimming with his 61-year-old grandfather in the pool of their apartment complex near Cotswold Avenue on Aug. 18 when the incident occurred. Matos said that his grandfather put his head underwater to wet his head but resurfaced too quickly. He inadvertently gulped some water and nearly drowned before Matos came to his aid.

“While we were at the pool we started laughing and playing and stuff,” said Matos. “He swallowed too much of the water, and I just saw him laying there with his head down and arms like this and I felt his heart and it wasn’t doing anything.”

Matos was able to drag his grandfather out of the pool before he performed CPR on him. His mother said that she had not taught her son CPR.

“I have never taught him that,” said Cerise Hammie. “It has never even dawned on me to teach him that. It’s a shame but it’s true. All of it goes to God. It had to have been God to step in and let this boy do what he did.”

The family dialed 911 and Matos’ grandfather was taken to the hospital where doctors were able to remove more water from his lungs.

“He takes care of me when I’m sad. He gives me Gatorade or like, soda, soming like that. even coke, or we go on a walk,” Matos said.

The little hero also said that he loves hanging out with his grandfather, but the dynamic duo will probably stay away from the swimming pool for a bit. “I want to hang out with him again, hug him and stuff, take him on a walk, but no pool anymore,” said Matos.