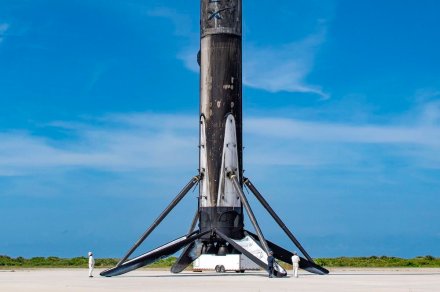 Posted By: adminon: May 26, 2022In: TechnologyNo Comments
Print Email

SpaceX chief Elon Musk has shared a remarkable image (below) that highlights the true scale of SpaceX’s workhorse Falcon 9 rocket. The photo shows a Falcon 9 booster shortly after it landed at Cape Canaveral in Florida at the end of a flight on Wednesday, May 25.

SpaceX has been successfully landing the first-stage booster for several years, and there’s plenty of footage online showing the vehicle touching down on the ground or onto an ocean-based barge at the end of a space mission.

But while some folks may already know that the rocket’s first stage stands at around 50 meters, others will have little idea about what that actually looks like. However, thanks to a couple of engineers standing at the base of the booster, Musk’s photo gives us the clearest idea yet of the rocket’s true size. And seeing it like this makes one marvel yet again at the incredible work that must have gone into developing the landing system for this enormous space vehicle.

Landed back at Cape Canaveral
(Humans for scale) pic.twitter.com/itiQ48JYmk

Safely landing the first-stage of the Falcon 9 rocket is at the very heart of SpaceX’s operation as it enables the company to reuse the booster for future flights. This reusability element allows it to save big bucks on mission costs and also makes possible a higher launch frequency.

Indeed, Wednesday’s mission, called Transporter-5, was the eighth launch and landing for this particular Falcon 9 booster. Previous missions saw it power the Crew-1 and Crew-2 astronauts toward the International Space Station in 2020 and 2021.

The Transporter-5 flight was part of SpaceX’s dedicated smallsat rideshare program and carried 59 small satellites into orbit for a range of customers. This is the fifth such rideshare mission conducted by SpaceX since the first one in June 2020.

SpaceX also shared footage of the booster touching down at Cape Canaveral at the end of Wednesday’s flight, which marked the company’s 22nd launch and landing this year: