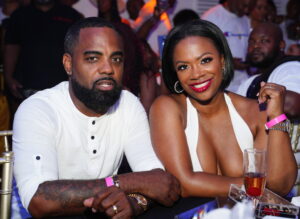 There are reports of a shooting that left one person injured at Blaze Steak and Seafood, owned by The Real Housewives of Atlanta star Kandi Burruss and her husband, Todd Tucker.

The shooting took place Wednesday at the RHOA star’s eatery located off Cascade Road, 11 Alive reports. South Fulton Police Lt. Rogers says an employee was involved in a fight and used their firearm, striking another employee in the arm, Kandi’s cousin, Melvin, who is the Blaze Seafood chef.

The injured staffer was taken to a local hospital with non-life threatening injuries. Meanwhile, the suspect fled the scene and is still at large.

Kandi and Todd opened the steakhouse named after their daughter in 2020. The couple also owns Old Lady Gang Southern Cuisine in East Point.

Both eateries have been featured on Kandi’s Bravo show, with OLG even securing a solo spinoff that follows the lives of the restaurant staff. This isn’t the first shooting that has taken place at one of Kandi’s restaurants.

In 2020, three people were shot after a man entered the Old Lady Gang restaurant to attack another man, according to East Point Police Capt. Allyn Glover. Two witnesses were injured in the shooting, and all three victims suffered non-life-threatening injuries.

As for the latest shooting, authorities haven’t released the names of the suspect or the victim, Fox 5 Atlanta reports. But fans of the RHOA star have taken to social media to respond to claims that Kandi’s cousin, Melvin Jones, was the employee who was injured in the shooting.

The Shade Room reposted screenshots Jones shared showing the bullet wound he sustained from the shooting.

“Still here cuz Granny be praying for me,” Jones captioned the gruesome photo.

Kandi’s cousin, Chef Melvin, revealed that he was injured during the shootout and shared images of the aftermath to his IG stories. https://t.co/Cl5sb8tJmD pic.twitter.com/VrzHS4zANS

Jones is a cast member on the Kandi & The Gang spinoff and has appeared on RHOA over the years due to his close relationship with his cousin. Kandi has shared how she helped…