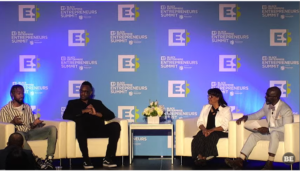 BLACK ENTERPRISE’s Entrepreneurs Summit assembled a panel of experts for a discussion on “Finding Your Flavor: Building Business & Success in the Food Industry.”

Launching a business in the food industry isn’t always a piece of cake. Experts shared their journeys and strategies to launch and scale a food brand and provided insight into current and future food trends.

Moderated by BLACK ENTERPRISE Senior Vice President/Editor-at-Large, Alfred Edmond, Jr., panelists explored the variety of avenues available for new entrepreneurs and how to build the team that will get you there.

For Hill-Holliday, owning and operating 12 McDonald’s franchises is no easy feat. But she remembers the days when she was working at the fast-food giant as a way through college.

What started as a job, eventually developed into corporate positions that helped open her eyes to the possibility of becoming an owner. Hill-Holliday worked around so many people who became owners that she decided to finally go after her piece of the pie.

“My drive was around that passion of ‘you’re doing it well for other folks, so do it for yourself.’”

Hayes shared how his late father served as inspiration to get himself out of the streets of West Philadelphia and start a business of his own. Using money from a disability settlement, Hayes relocated to Atlanta and eventually started a food chain representing his hometown.

Jeannot shared his journey from working as a chef to launching GoOats. He recalled the sacrifices he had to make, like selling his car and downsizing to a basement apartment from a condo so that he could afford to manage his business properly.

“Nobody is going to work hard at your dream. You have to do the work,” Jeannot said.

Panelists spoke candidly about their past struggles and how the setbacks shaped their future success in the food industry. A reoccurring theme was how they all had…