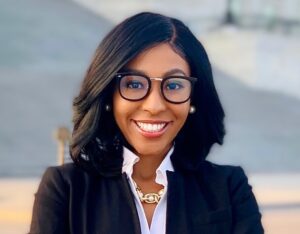 Erica Loewe, director of African American media at the White House, is bolstering Black press and other media of color’s ingress to high-ranking administration and cabinet officials at the executive mansion, reports the Seattle Medium.

“President Biden and Vice President Harris promised an administration that looks like America, and they have fulfilled that promise,” Loewe said during a recent visit to the National Newspaper Publishers Association headquarters at the Thurgood Marshall Center in Northwest, Washington, D.C.

“Since day one, the Biden-Harris Administration has valued diversity, empowered Black voices, and taken a whole-of-government approach to advance racial equity,” she said.

Born in South Carolina and raised in Miami, the 32-year-old director earned her bachelors in public relations at the University of Florida in 2011 and would go on to intern for the Obama administration.

“Jim Clyburn is one of my favorite bosses and he’s been very clear that I need to tell people that I’m from Charleston even though I grew up in Miami,” Loewe said. “He’s a great man and I’ve learned a lot from him.”

Loewe mentioned that although her mother struggles with Alzheimer’s now, “somewhere inside, she’s there, proud of me.”

She reiterates her joy on providing access to Black media unlike ever before seen at perhaps the most powerful institution in the world.

“Never has there been an administration that has uplifted and supported Black women as much as President Biden and Vice President Harris,” Loewe said. “It’s just a fact. Numbers don’t lie. The Honorable Harris is a Black woman who has lived experiences not just as a Black face to look nice. She attended Howard University and she’s a member of the Divine Nine, the Black Church and an advocate for Black maternal health and accurate home appraisals for Black people.

“These are not symbolic positions,” Loewe said to close.