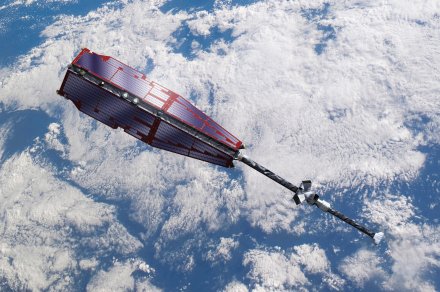 ESA satellite in a race against time to dodge space junk

The accumulation of junk which is damaging to the environment isn’t only a problem here on Earth: it’s also a problem in space. Every year more and more discarded rocket stages, broken satellites, and other bits of debris are put into orbit around our planet, and not all of them are responsibly de-orbited. The result is that there’s a whole lot of junk floating around in the space where satellites, telescopes, and even the International Space Station orbit.

This debris can pose a real threat to space missions, as demonstrated recently when a European Space Agency (ESA) research satellite had to perform an emergency maneuver to avoid a collision with a stray piece of junk. While there is so much debris around that the need to perform such maneuvers is unfortunately relatively common, this event was different because ESA had only hours of warning that an impact was imminent.

Typically, large pieces of debris are tracked so that space agencies or other satellite operators know when a piece is coming near to an orbit that is currently in use. This means they can plan out avoidance maneuvers in advance. But when a piece of debris was spotted on 30 June headed toward one of ESA’s Swarm satellites which research the Earth’s magnetic field, the impact was predicted to occur within a few hours.

“ESA’s Space Debris Office analyses data from the U.S. Space Surveillance Network and raises the warning of a potential collision to ESA’s Flight Control and Flight Dynamics teams, usually more than 24 hours before the piece of debris comes closest to the satellite,” ESA writes. “In this case, we only got eight hours’ notice.”

ESA had to pull out all of the stops to get the satellite clear of the debris’s path, as performing such maneuvers requires a large amount of planning. The operators have to ensure that the satellite’s new orbit won’t put it too close to any other satellites or debris, and they also have to have a plan for how to return the satellite back to its original…