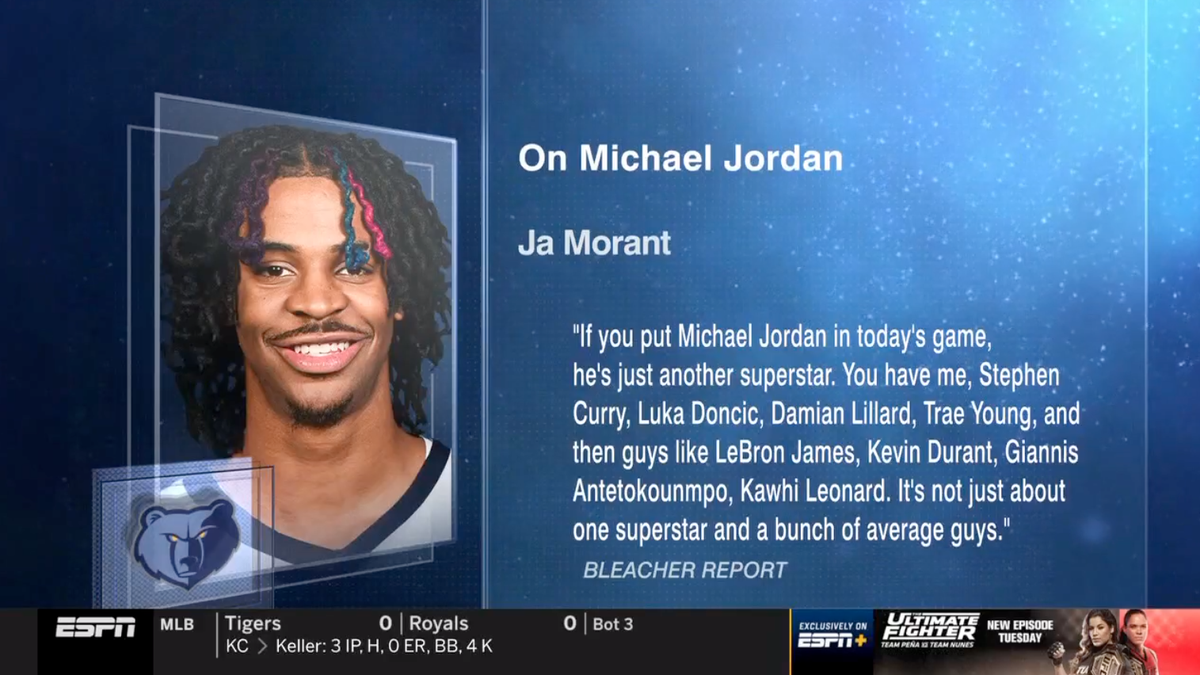 Come on, ESPN, you’re better than this! Falling for a parody Twitter account is just sooooo 10 years ago. Especially from Ballsack Sports — at least look for a blue check. That’s a two-second read right there to make sure you don’t get Sacked, and yet here we are. No choice but to make fun of you now, especially given that it’s not even the first time it’s happened.

On Sunday, self-described satirical Twitter account Ballsack Sports tweeted out a fake quote from Memphis Grizzlies star Ja Morant, writing, “If you put MJ in today’s game he’s just another superstar. We got me, Steph, Luka, Dame, Trae — and then guys like Bron, KD, Giannis, Kawhi — it’s not just one superstar and a bunch of you know, average dudes, you feel?”

It would be a flaming hot take if, you know, Ja had actually said any of that. But he didn’t. Too bad the ESPN segment producer didn’t double-check that, though, before handing it to Kendrick Perkins and airing it on This Just In yesterday.

ESPN credited Bleacher Report in the segment, presumably based on an actual interview that Morant did with BR’s Taylor Rooks, in which he laughingly said that he’d “cook” MJ in a one-on-one game, continuing, “Nobody got more confidence than 12. I’m never gonna go and say nobody gonna beat me in one-on-one any day. I don’t care what sport it is, soccer — who [is] the best player in soccer? Let’s set it up.”

Save 32% during prime day

Transparently awesome
These earbuds have active noise cancellation, transparency mode to let in outside sound as needed, and active EQ to ensure you get the best out of your audio.

ESPN did cite the real transcript from Ja’s interview, but then followed it up with the fake Ballsack Sports quote, which they mistakenly attributed to Bleacher Report. Should’ve quit while they were ahead!

Rooks also took to Twitter to correct ESPN, writing, “he absolutely did not say this in the interview. and I can’t believe it was broadcast that he did. There should be a correction…