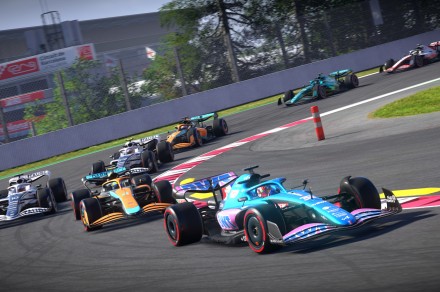 F1 22 in VR is the ultimate dad power fantasy

With most annualized games, there’s not too much to get excited about with a new year’s entry. Some new features and slightly tweaked visuals can be a nice touch, but the churn of yearly releases usually prevents franchises like Madden from delivering sweeping updates between years.

F1 22 is bucking against that trend with its full VR support. PC players will be able to experience the entire game through supported headsets like the Quest 2 for the first time ever. Based on a VR demo I played at Summer Game Fest, that’s a significant addition to the series. F1 22 in VR feels like the ultimate “dad game” — one that amps up the simulation experience for those who don’t mind investing in an in-depth tech set-up.

My demo wasn’t exactly an experience that most players will have access to. EA had a top-tier racing set-up at the show, featuring a high-end wheel with realistic feedback, pedals, and racing chair. The pièce de résistance, of course, was a Quest 2 headset, which put me directly in the cockpit.

Mercifully, EA kept the controls simple for the demo, so I’d only have to worry about managing my speed and turning. I was placed on a standard F1 track and was free to ride around in first-person, using the game’s dynamic racing line to help me regulate my speed.

The F1 series is already known for its authentic simulation experience, but VR brings a different level of realism to it. Usually, I hate playing racing games in first-person, opting for a third-person view of my car. In VR, that perspective becomes much more appealing. I was peeking out of my side windows to better see upcoming turns, craning just a bit in my seat to see over my tires, and even stopping to look up at the sky (something that led to a few crashes, as you’d expect).

Of course, none of that would work as well as it does if the core racing wasn’t rock solid. Developer Codemasters is one of the best in the business when it comes to racing titles and that was immediately clear when playing my demo. I wasn’t thinking about controls or game mechanics at all; I felt like I was racing, not…