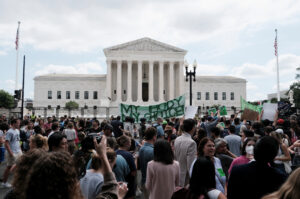 (Reuters) – A small but growing number of companies, including JP Morgan Chase & Co, Amazon.com and Tesla Inc, are rolling out policies to offer benefits to U.S. employees who may need to access abortion services.

The U.S. Supreme Court on Friday took the dramatic step of overturning the landmark 1973 Roe v. Wade ruling that recognized a woman’s constitutional right to an abortion and legalized it nationwide.

Following is a list of companies who have offered their U.S. employees reproductive healthcare benefits including abortion coverage or travel benefits for out-of-state abortions.

JPMorgan Chase & Co – The company told employees it would pay for their travel to states that allow legal abortions, according to a memo seen by Reuters.
Citigroup Inc  – The bank has started covering travel expenses for employees who go out of state for abortions because of newly enacted restrictions in Texas and other places, becoming the first major U.S. bank to make that commitment.
Yelp Inc – The crowd-sourced review platform will extend its abortion coverage to cover expenses for its employees and their dependents who need to travel to another state for abortion services.
Amazon.com – The second-largest U.S. private employer told employees it will pay up to $4,000 in travel expenses yearly for non-life threatening medical treatments, among them elective abortions.
Levi Strauss & CO – The apparel company will reimburse travel expenses for its full- and part-time employees who need to travel to another state for healthcare services, including abortions.
United Talent Agency – The private Hollywood talent agency said it would reimburse travel expenses related to women’s reproductive health services that are not accessible in an…