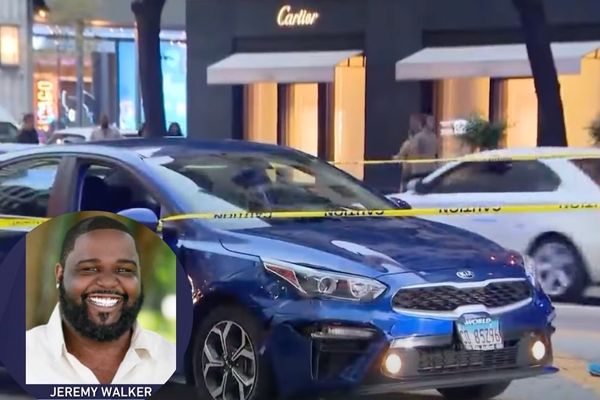 The family of a man fatally stabbed by another driver in rush-hour traffic in downtown Chicago this week is trying to make sense of his brutal killing.

Reports show Jermey Walker, 36, got into a psychical altercation with another driver who jabbed him in the neck with a knife before Walker died at a nearby hospital on Tuesday, Aug. 23.

Walker’s family described him as an “all-around guy” who dedicated most of his time outside work to his longtime girlfriend and 12-year-old son. He was expected to be on the sideline of his son’s basketball game on Aug. 27.

Daphne Terrell, Walker’s mother, is trying to answer all of the boy’s questions while trying to cope with the loss.

“His son asked what’s going to happen now that his dad won’t be at his game Saturday,” Terrell told the Chicago Sun-Times. She told him: “Let’s play this ball for your dad and show him that you’re going to be the best that you can.”

Witnesses said they saw Walker get out of a blue Kia and approach a man in a black car about honking at him. The other man also got out, and the men started punching each other in the middle of the busy street near a red light. A witness said Walker, the bigger of the two, pinned the other man on the ground. The driver of the black car then pulled out a knife causing Walker to back off.

“He [Walker] tried to control the knife with one arm, and when the knife slipped, it went into his neck. Everyone was in shock,” a witness told the Chicago Sun-Times.

Witnesses and authorities said the driver sped away, and Walker got into his car and flagged down a police officer some distance from the scene.

The witness, who wanted to stay anonymous, told reporters he tried to help Walker as blood poured from his neck.

“I’m by the guy, trying to talk to him to keep him up,” he said. He left Walker’s side to help his brother get a towel from the car, and Walker got back into the Kia and left.

His brother, who also did not want to be named, said the stabbing was a learning lesson.

“Sometimes people get road rage for me. I’ve got to take a step back and…