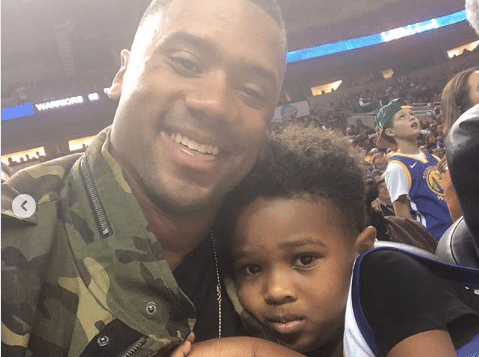 Russell Wilson shared a video of him post working out with his stepson Future and choreographer Jamaica Craft’s son Kingston. The Denver Broncos quarterback switched positions up and let the two boys take his job as quarterback while he caught the football.

Future Zahir was first up and he followed the instructions of his stepfather who told him to shift, “up” and “back.” His turn finished with him tossing the football to the 33-year-old and switching places with Kingston.

The comments section quickly filled up with admiring fans who praised Russell for taking on the fatherly role with Future.

“He’s a great dad that’s for sure”

“You are such a great father/role model for Future”

“Russ is the kind of father we all wish we had coming up. Respect dawg”

“I know you’re proud. You and Ciara are raising him well”

“That’s my quarterback! You are an awesome dad coach, and role model”

Russell has been in Future Zahir’s life for quite some time, though their father/son dynamic raised some tension in the past with the 8-year-old’s biological dad and rapper, Future, many fans note how beautiful it is to see the duo’s relationship.

“I love everything about you guys”

“You guys are the cutest things I’ve ever seen”

Russell Wilson has always shown his love for his wife and his family no matter what the public had to say about him. For a person some people may brand him as “soft” the 64,000 liked video’s comments section was filled with nothing but adoration.

“How can anyone hate on this man? A great player and an even better father”