BREAKING NEWS
GMT-4 10:33
Home Economics Fans Call Out Safaree for Trying to Show Off His ‘Hoochie Daddy Shorts’ While Spending Time with His Kids 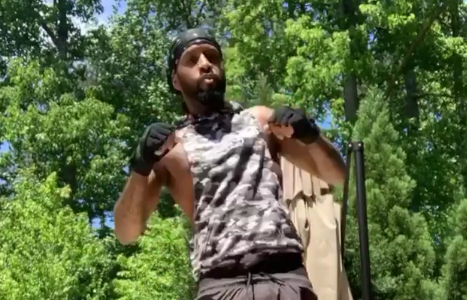 Hoochie daddy short season is upon us, and Safaree Samuels is the latest celebrity to go viral for the shorts that have women catcalling men to compliment their nice thighs. But instead of praise, fans are calling out the “Love & Hip Hop:Atlanta” star for doing so while spending time with his kids.

In Samuels Instagram story, he is showing off his glistening abs and tattooed chest. In the video, you can see him pushing a stroller holding his 2-year-old daughter, Safire Majesty, and son Legend Brian, who turned 1 in June.

Safaree Samuels poses with his daughter, Safire Majesty and son, Legend Brian, whom he shares with Erica Mena. (Photo: @safareesamuels/Instagram.)

“They say to be a hoochie daddy, you gotta be a daddy, daddy,” said the 41-year-old before using his signature Jamaican accent. He continued, “Some say yo,” before one of the kids began to repeat after him saying, “Yo.”

“Hey, hey I’m not talking to y’all ok?!” Samuels mentioned before gloating about his shorts and finding “two-inch hoochie daddy shorts.” He added, “I’m going for those next.”

A few in the comments sections were gushing over how “fine” Samuels looked in his mustard yellow shorts including one person who said, “And he looks amazing in it.” A second person said, “I love it Safaree just be livin’ his life no matter what y’all say” and a third commentator wrote, “I’m sorry but these are weird !! I wish tf my man would !!”

Meanwhile, dozens were focused on the Brooklyn native dismissing his children. Some felt he should be focused on spending quality time instead of making an Instagram video.

“Not with him dismissing the kids.”

“He really thought that it was a good idea to record this while pushing his kids in a stroller.”

“Walk the kids and stop the foolishness bredda.”

A handful brought up Samuels’ ex Nicki Minaj and his estranged wife, Erica Mena. One person said, “He embarrasses me like I’m Nicki and…