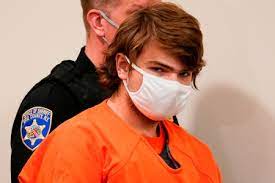 A federal grand jury is indicting the alleged supermarket shooter in Buffalo, New York. Payton Gendron will be charged with 14 hate crime violations and 13 firearms offenses connected to the mass shooting at a Tops grocery store in May.

The 19-year-old White man opened fire with a semi-automatic rifle and killed ten Black people while three others were injured. The suspect drove over 200 miles from his home in Conklin to the predominately Black neighborhood, where he live streamed the attack on Twitch.

NBC News reported a manifesto allegedly written by Gendron was posted on Google Docs the night prior to the killings. The document allegedly lays out plans to attack Black people, and promotes conspiracy theory claims that white people are being replaced by minorities in the U.S.

Attorney General Merrick Garland announced the indictment and said the Justice Department “recognizes the threat that white supremacist violence poses to the safety of the American people.”

With these charges, Gendron will have a maximum penalty of life in prison or the death penalty if convicted. He has pleaded not guilty to the May 14 shooting and has been held without bail since his arrest.