BREAKING NEWS
GMT-4 11:44
Home Politics Female House Democrats Arrested And Handcuffed During Protest At SCOTUS, But 1/6 Insurrectionists Were Not 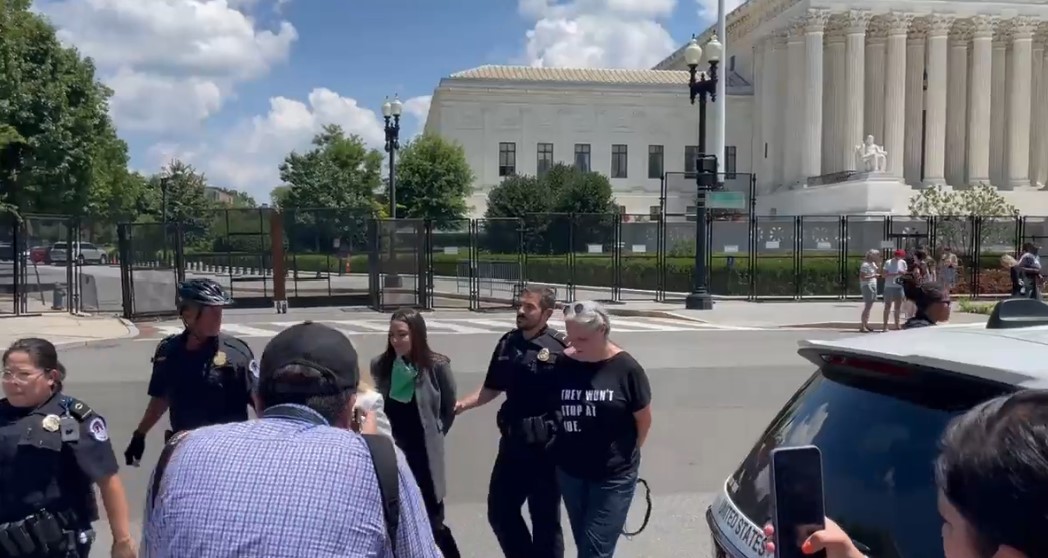 Female House Democrats Arrested And Handcuffed During Protest At SCOTUS, But 1/6 Insurrectionists Were Not

Rep. Alexandria Ocasio-Cortez (D-NY) and several other Democratic members of Congress were arrested for “blocking traffic” during an abortion rights protest at the Supreme Court.

Multiple members of Congress, including @AOC, being arrested by Capitol Police for blocking traffic outside the Supreme Court in abortion rights demonstration: pic.twitter.com/fysQN1oBAw

Just now, @RepPressley arrested protesting on the steps of the Supreme Court for abortion rights pic.twitter.com/Lh0US0BvbX

Staff confirms this is video of Rep @ilhanmn under arrest and in handcuffs , she and other female Members were arrested in a protest supporting abortion rights in front of the Supreme Court today pic.twitter.com/2RwOAq6U2J

Peacefully protesting outside of the Supreme Court for a fundamental human right and equal citizenship will result in arrest, but violently trying to overthrow the government on January 6th in armed rebellion where police officers died does not.

There is something seriously wrong when domestic terrorists get to pose for pictures and post about their crimes on social media and female members of Congress get arrested for protesting the theft of their rights by six Supreme Court justices.

As our own Sarah Jones put it:

Plotting an attack on your own country from Congress: no arrests

Maybe the members of Congress should have been using the new constitutional right given to the by the Supreme Court and been protesting for control over their own bodies while carrying AR-15s?

The situation is a disgrace, and people around the country should not stop protesting until all Americans are treated equally.

Mr. Easley is the managing editor. He is also a White House Press Pool and a Congressional correspondent for PoliticusUSA. Jason has a Bachelor’s…