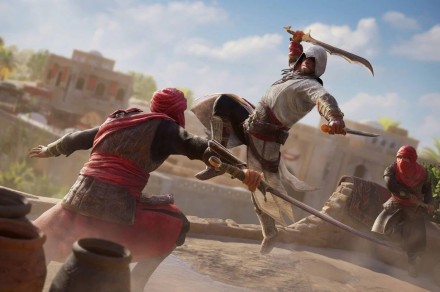 The game’s new protagonist is named Basim. Originally born in Samarra, Basim goes from a cunning street thief to a master assassin with the help of his mentor, Roshan, played by Iranian-American actress Shohreh Aghdashloo. Basim flees Baghdad and joins an ancient organization called the Hidden Ones in its stronghold called Alamut. Here, Roshan takes Basim under her wing, making him her first true apprentice.

Ubisoft is offering a collector’s edition, which includes the deluxe version of the game, and a DLC pack inspired by the Prince of Persia series. It also comes with a steelbook case, a selected soundtrack, a figurine of Basim, a replica of Basim’s brooch, a map of Baghdad, and a digital art book. The whole package will cost $150.

While details on Hexe weren’t provided, it has been reported that it will take place during the Holy Roman Empire and will involve witch trials. Both Red and Hexe are reportedly not expected to release until at least early 2024.