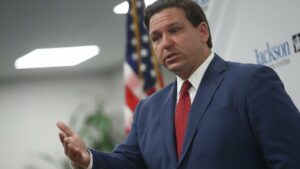 According to CNN, Judge J. Layne Smith, who DeSantis appointed to the 2nd Circuit Court of Florida, sided with Democrats and voting rights advocates’ claims that the map violates the state constitution “because it diminishes African Americans’ ability to elect the representative of their choice.”

The order could come as soon as this week, and a DeSantis spokesperson said in a statement the ruling would be appealed.

“As Judge Smith implied, these complex constitutional matters of law were always going to be decided at the appellate level. We will undoubtedly be appealing his ruling and are confident the constitutional map enacted by the Florida legislature and signed into law passes legal muster. We look forward to defending it,” spokeswoman Taryn Fenske said in a statement.

The Florida Republican-controlled legislature pushed the congressional map through the state government along party lines. The map eliminated two districts represented by Black lawmakers and would give Republicans the advantage in as many as 20 districts in the state.

The governor argued that the state’s 5th Congressional District, represented by Al Lawson, was unconstitutional because it stretched 150 miles from Tallahassee to Jacksonville. But Smith said the district has historical roots in Black communities on the Florida-Georgia border. Smith added the precedent set by the state Supreme Court and the state constitution says a reappointment plan cannot diminish the ability of minority residents “to elect representatives of their choice.”

DeSantis’ map cuts the number of districts where Black residents make up the majority of voters from four to two. Additionally, the map also shrank the percentage of Black voters in Florida’s 10th congressional district, represented by Rep. Val Demings, a Black Democrat currently running for a U.S. Senate seat.

Earlier this year, Florida lawmakers approved a map and a backup in case the first was found…