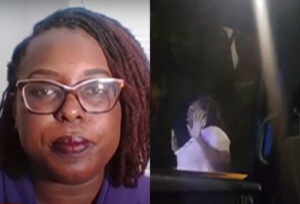 A Florida police officer handed in his resignation after a video of him pulling a gun on a pregnant Black woman while her three children watched from the vehicle was released.

According to NBC News, Bradford County Sheriff’s Deputy Jacob Desue stopped Ebony Washington because she was allegedly going 72 miles per hour in a 55-mph zone.

The footage shows the white police officer trailing Washington, who turns her hazard lights on, slows the vehicle down, and drives into a gas station. The body camera footage picks up Desue’s orders, “If you make any movement, that’ll be your last mistake you’re going to make,” as he points a gun at Washington.

Washington allegedly placed her arms outside her window in plain view and informed the officer that her door was locked. Desue reportedly responded, “Unlock it. I’m not worried. I’ve got my gun on you.”

In the video, Washington gets out of the vehicle, and Desue immediately places his weapon on her back. The footage continues with Washington explaining that she didn’t want to stop in the middle of nowhere because she is pregnant and has three children in the vehicle.

Desue allegedly responded, “Your excuse means nothing to me right now. I don’t want to hear it.” The officer reportedly placed Washington in handcuffs and took her to the rear of the police car.

Bradford County Sheriff Gordon Smith spoke to First Coast News and expressed that Washington did the right thing by ensuring she and her children were not in harm’s way.

“She does exactly what I would tell my daughter, my wife, my neighbor, anybody else that may feel uncomfortable: You reduce your speed, you turn on your flashing lights, be acknowledged,” Smith said.

“Deputy Desue should have cleared it, checked with the children, make sure they’re safe. Why were they upset? We don’t know why they’re upset. I’d later determine it was probably because of the way their mother was being…