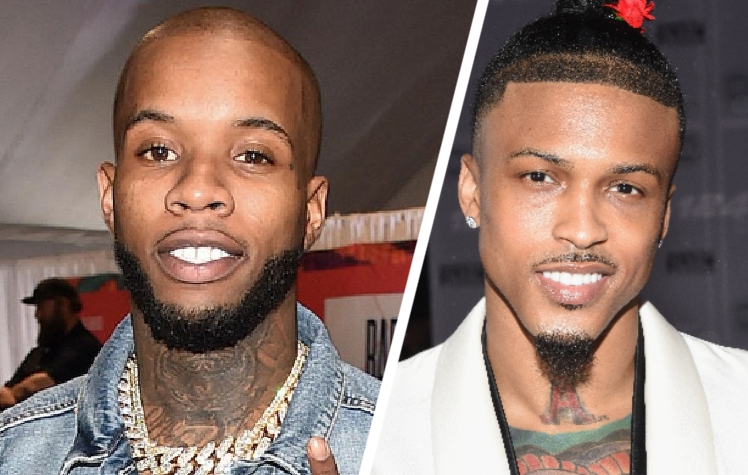 A video has surfaced confirming part of the detailed story August Alsina gave in his claims of being assaulted by Tory Lanez. August accused Tory of assaulting him over the weekend because of a dap and shared a photo of himself with a bloody mouth. Tory responded to the allegation by saying he was in the studio the night of the alleged assault and denied being involved in “anything negative.”

However, the footage confirmed that Tory was at the exact location as August, and he had attempted to greet August, but he got sidestepped. The video shows Tory and his crew standing together, and after August ignores him, he goes in the opposite direction. The camera then shows him and his crew heading in August’s direction. Meanwhile, an onlooker says, “Don’t do it. You already shot Megan.” Later, he returns with more vigour in his step. At that point, someone asks Tory if he had “knocked his ass out.”

The footage, captured by an onlooker, seemingly shows before and after the alleged assault, but August had claimed there was another video showing the actual attack. While detailing the assault and showing a picture of himself with a bloody mouth, August dared Tory to release the video that one of his goons took during the assault. August also came forward with more images of his wounds via Instagram, showing his bloodied face, arm, and knee.

However, when Tory was interviewed via phone call by DJ Akademiks, he asked if the conversation was being live-streamed before he denied knowing about anything August said. Nevertheless, in light of the released footage, Complex reported that the district attorney’s office in Los Angeles is currently probing the alleged assault.

The DA’s office told Complex, “We are aware of the allegations that the defendant attacked artist August Alsina and are investigating these claims. The allegations are serious and will be thoroughly examined.”

Watch the video with Tory and August below.