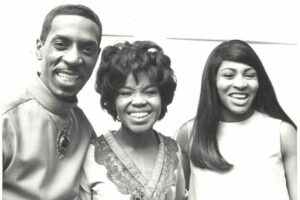 P.P. Arnold, a 60s soul singer and former member of the Ikettes, is releasing a memoir where she details the time Ike Turner sexually assaulted her.

Ahead of her book being published, Arnold spoke with The Telegraph about some of the harrowing encounters she shares in the memoir. She once sang alongside Ike and Tina Turner as a member of their background vocalist team and can recall the time Ike locked her in a room and raped her.

“What can I say?” the 75-year-old said. “It was awful. I despised Ike on that level, but I didn’t know how to express myself.”

Tina Turner revealed the abuse she suffered at the hands of Ike during their marriage in her autobiography turned biopic, What’s Love Got to Do With It. The film portrayed an instance where Ike locked Tina inside a room and sexually assaulted her.

While many would wonder why Arnold didn’t try to find some solace from Ike’s battered wife at the time, she explains why she kept the rape a secret from others.

“I was told Tina wanted to get rid of me because Ike was after me,” Arnold said.

“If I had run to Tina or called my parents, it would have meant I would have [had] to come home.”

Arnold had no desire to return home to her abusive husband, David. She says she was forced to marry him after a DIY coat hanger abortion went wrong and resulted in the birth of her son, Kevin, at age 15.

While she also despised the abuse her husband subjected her to, Arnold says she “dealt with it.”

“Sadly it was the way it was back then,” Arnold said. “I think it’s a lot to do with slavery and how that affected the black man’s psyche.”

The memoir reveals Arnold’s past Hollywood romps, including being a “plaything” to rock star Mick Jagger and his girlfriend Marianna Faithfull, NY Post reports.

“Mick was in heaven, but Marianne was more interested in me,” she shares in her memoir. “I had always been a good kisser, and so was she. I tried to let myself go, but I was also uncomfortable… ultimately it was Mick that I was infatuated with, not her. There was a plantation feel about it, like I was a plaything.”