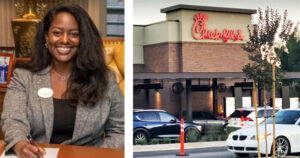 Amber Thomas, who was an intern at Chick-fil-A just five years ago, is now the owner of her very own Chick-Fil-A restaurant franchise in her hometown of Spring Valley, California, a suburb of San Diego.

“I never thought coming into this parking lot saying like, ‘Hey, one day I’m going to own and operate a Chick-fil-A in this location.’ So, it goes back to making it feel surreal. I’m still trying to register the fact that I’m here, that I’m serving this community,” she told 10News.

Thomas didn’t really plan to become an entrepreneur and a restaurant owner at first. She is thankful to her mother, grandmother, and her family for the support they have given her in her new endeavor.

“She wanted to be a physical therapist and she was adamant about that. She was like, ‘No, mom. I’m not going to be a Chick-fil-A owner,’ and then it just got in her blood. Her sister inspired her to be an owner and it went from there,” said Thomas’ mother Monica Hopkins.

Thomas hopes to also inspire others that they can achieve something as well.

“I’ve had so many come in and provide support and saying like, ‘Hey, it is great to see someone who looks like me running a restaurant and owning a restaurant in our community,” Thomas said.

As a former employee at the Chick-fil-A restaurant located on Sports Arena Boulevard near Downtown San Diego, Thomas has been very hands-on in operating her own franchise. She greets the customers coming in and she also offers words of encouragement to her employees like how she would probably tell her 17-year-old self.

“I would just tell her that keep doing what you’re doing, work hard, and you’ll be so proud of yourself later on down the line,” she said.

This story first appeared on BlackBusiness.com.