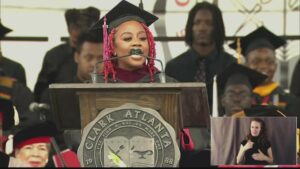 Atlanta restaurant owner Aisha “Pinky” Cole surprised over 800 graduates of her alma mater Clark Atlanta University with a kickstart to launch their own businesses.

Per a press release from the university, Cole graduated in 2009 with a major in mass communication/media studies. She was crowned Miss Clark Atlanta during her undergrad in 2008 and initiated into Delta Sigma Theta Sorority, Sigma chapter.

“It is a full-circle moment to have Ms. Aisha Pinky Cole serve as Clark Atlanta University’s 2022 Commencement orator. We are excited that Pinky — as we affectionately call her – will serve her alma mater in this capacity,” said CAU President Dr. George T. French Jr.

“Pinky Cole had a business and lost everything,” Cole said during the address. “My car got repo’d, got kicked out of my house, went flat broke, almost lost my mind — and almost four years later, she now owns and operates at $100 million vegan brand. She found aspiration in the losses,” she said. “You think I was gonna give up because of some failure? Hell no. And neither will you.”

Cole stated that there is inspiration in failure.