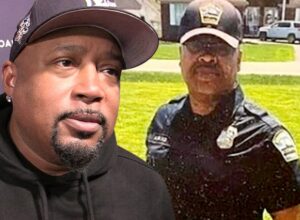 Shark Tank star and FUBU CEO Daymond John is offering his financial support to the family of the security guard who killed in Saturday’s racially-motivated mass shooting at Tops Friendly Markets in Buffalo.

According to TMZ, the son of Aaron Salter Jr. received a compassionate call from John after discovering that the retired police officer was a fan of Shark Tank. The businessman vowed to help with funeral expenses and additional bills.

“He offered a little help, and I just said, ‘Hey, I’m just looking to take care of my mom,’ and he told me that he wouldn’t have a problem doing that, that someone would be in touch,” Aaron Salter III told TMZ.

The conversation turned emotional, and John vowed to help the Salter family should they need anything in the future.

“We spoke and I think I was telling him about just kind of what happened, and he got a little emotional,” Salter III continued. “I could hear it in his voice.”

Like John, Salter Jr. was also an inventor who wrote on his LinkedIn page that he dreamed of getting “cars to run off of water.”

The 55-year-old Salter Jr. was a police officer in Buffalo for three decades. He spent the last four years working as a security guard at the Tops Friendly Markets, where he was among the 10 who were massacred this past weekend, The Daily Beast reported.

Hailed as a hero, Salter Jr. discharged his weapon and tried to stop the gunman, whom police have identified as 18-year-old Payton Gendron. But the bullets couldn’t pierce Gendron’s body armor. Police say he assailant returned fire and killed Salter Jr.

In addition to John’s aid, the Salter family is crowdfunding to establish a non-profit in his honor. The GoFundMe has reached over $40,000 and counting.