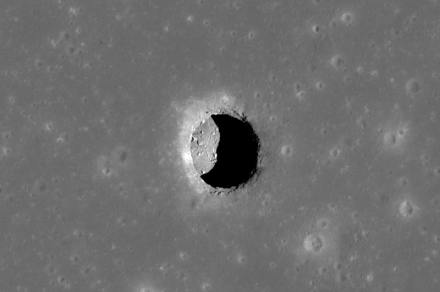 Future moon explorers could make a cozy home base away from the alternately freezing and hot conditions of the lunar surface by sheltering in lunar pits. These pits stay at a consistent and comfortable temperature, according to new research.

Researchers from the University of California, Los Angeles have found that within pits on the moon’s surface, temperatures could stay at a cozy 63 degrees Fahrenheit. This is considerably more comfortable than the rest of the lunar surface, which can get up to 260 degrees during the day and as low as minus 280 degrees at night.

This is a spectacular high-Sun view of the Mare Tranquillitatis pit crater revealing boulders on an otherwise smooth floor. This image from LRO’s Narrow Angle Camera is 400 meters (1,312 feet) wide, north is up. NASA/Goddard/Arizona State University

The huge swings in temperature are due to the moon’s long days and nights, which last around 15 days each. To help make conditions more manageable for future moon explorers, the pits provide a promising potential location for a future moon base.

Around 200 of these pits have been discovered so far, and some of them are thought to be related to lava tubes. These caves form underground when molten lava flows beneath cooler lava, leaving a void in its wake. The ceilings of these tubes can collapse, opening up a pit.

“About 16 of the more than 200 pits are probably collapsed lava tubes,” said lead author Tyler Horvath in a NASA statement.

As well as providing shelter, these lava tubes could potentially host other resources like polar ice reservoirs, and there are plans to send robotic missions to explore the tubes to understand the moon’s subsurface.

The temperature of the pits was determined using data from the Lunar Reconnaissance Orbiter (LRO), a NASA spacecraft orbiting the moon which takes images of the moon’s surface. The LRO imaged pits such as a large pit in the Mare Tranquillitatis region, which is a depression around 100 meters deep. The pit has an overhang of rock which prevents the pit from getting too hot during the day and keeps the heat in at night, according to a UCLA…