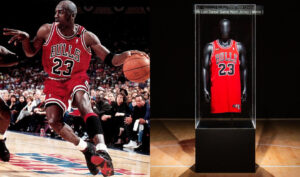 A record $10 million was dropped for a basketball jersey belonging to arguably the most well-known professional basketball player the world has seen.

Sotheby’s took to Twitter to announce that a basketball jersey that Michael Jordan wore for the 1998 NBA Finals set a record for the most money paid for a game-worn item by selling for $10.1 million.

A record-breaking day. Michael Jordan’s iconic 1998 NBA Finals ‘The Last Dance’ jersey has sold for $10.1 million, setting records for a basketball jersey, any game-worn sports memorabilia, and most valuable #MichaelJordan item ever sold at auction. pic.twitter.com/7t8G98N5pW

According to Fox Business, the exact $10.091 million that was spent on the jersey surpassed the previous record set for an NBA game-worn jersey owned by the late Los Angeles Lakers small forward and shooting guard, Kobe Bryant. The Black Mamba’s jersey sold for $3.69 million at an auction last year in May. Bryant wore the famous jersey during his rookie year from 1996 to 1997.

Jordan’s jersey surpassed a record for another jersey that was previously auctioned. The item, Diego Maradona’s “Hand of God” jersey, was auctioned for $9.28 million. Maradona wore the valuable item at the 1986 World Cup.

Reportedly, another Jordan collectible previously held the record for the highest paid item at a Sotheby’s auction that took place in October 2021. The item was an autographed Upper Deck game jersey patch card which sold for $2.7 million.

Although Jordan’s game-winning jersey sold for just over $10 million, it still doesn’t take the top spot for the item that has brought in the highest overall total for an auction. That distinction reportedly belongs to the Mickey Mantle 1952 Topps card that sold for $12.6 million. The sale took place last month.

“In the weeks since we announced the auction, there’s been palpable excitement from, not only sports fans, but collectors alike who are eager to own a rarified piece of history,” Brahm Wachter, Sotheby’s head of streetwear and modern collectibles, told Fox Business.