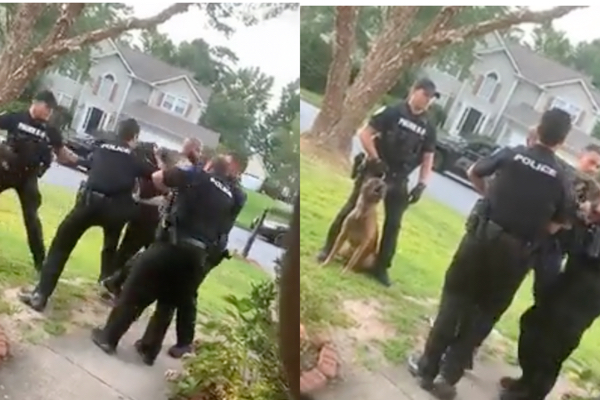 A Georgia man plans to take legal action against police after he was attacked by a K-9 when his wife called 911 for a mental health crisis.

Officers with the Alpharetta Police Department arrived at Travis Moya’s home last July after his wife, Kami Moya, and stepson reported that he was pacing back and forth in the house and grunting and punching his car. Kami said she was worried about his mental state, but dispatchers flagged the report as a domestic violence call.

Alpharetta police attempt to arrest Travis Moya right before he is attacked by a K-9. (Photo: Screenshot of Twitter video.)

Police body-worn camera footage shows a restrained Travis surrounded by three officers as he falls to the ground. A third officer was holding a police dog that tore into the man’s skin, leaving him with 40 bite wounds all over his body. He also suffered a concussion.

Police said the officer released the dog on Travis Moya because he was aggressive. They said Moya started to take his jacket off and walked down the driveway in the direction of the K-9 officer with his fists balled.

The K-9 officer wrote in the use-of-force report that he told Moya he had “a K9 partner in my vehicle and if he walked up on me, I would release the K9, and he would be bit.”

The body-worn camera shows Moya walking toward the front of his house with a jacket partially off when an officer pulls up.

“I don’t know if he took anything, but he’s not his usual self. He’s breathing hard…” Kami Moya said before she was interrupted by Travis, who yelled down the driveway. The officer then warned the man about the K-9.

The officers also said that dog latched onto Moya because he…