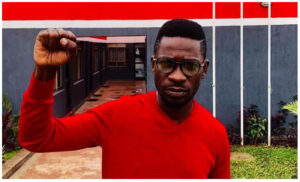 Wine challenged Museveni last year when he ran for the president of Uganda. The musician has survived several beatings and an assassination attempt, but he has not been detoured in his quest to highlight the corruption in his country.

“We must get our freedom or we shall die trying.”

“My people, the Ugandan people, are familiar with my journey through music, politics, imprisonment and torture, but this film is a microcosm of my country’s larger struggles under an unrelenting dictatorship that has been operating with impunity for decades,” said Wine. “I can’t wait for global audiences to see the reality of the situation and question their leaders’ support for this regime.”

The documentary had its world debut on Sept. 1 at the 2022 Venice Film Festival and Wine, whose real name is Robert Kyagulanyi, was in Venice to promote the film directed by Christopher Sharp and Moses Bwayo. Wine said that he hopes the film will prompt the international community to act.

“I hope then they get to realize what exactly they are paying for, what they’re sponsoring: genocide, murder, oppression, dictatorship,” he said.

Yesterday, I was honoured to take part in the 79th World Film Festival in Venice, Italy. I am humbled that a documentary film capturing events of the past 5yrs of our struggle to #FreeUganda of tyranny was selected among the top 20 films in the world to grace this festival pic.twitter.com/POAUVj2Do4

Sharp told Variety that people have been tortured under Museveni’s leadership, having had their “fingers chopped off, tongues chopped off, eyes gouged out.” Bwayo told the outlet that he could no longer live in Uganda due to his work on the film to protect his safety.

“We couldn’t live in Uganda anymore. I’ve been shot in the face; I’ve been arrested; I’ve been locked up for a couple of days. I’ve been followed, intimidated,” said Bwayo.