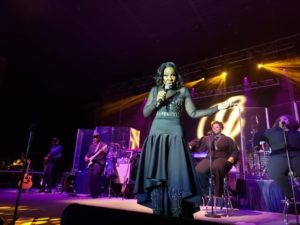 Soul singer Gladys Knight is among those whose lifetime contributions to American culture will be recognized at the 45th Kennedy Center Honors, NPR reports.

The Honors are held to raise money for the Kennedy Center while also honoring prominent figures. Typically held the first weekend of December, the ceremony will take place on Dec. 4 and will be broadcast later on CBS and streamed on Paramount+.

David Rubenstein, the chairman of the Kennedy Center, praised Knight as the “Empress of Soul,” who has showcased “a boundless vocal range and soulfulness that has stood the test of time,” Deadline reports.

The 78-year-old Grammy Award-winning icon expressed her gratitude for the honor in a statement.

“I’m humbled beyond words to be included amongst this prestigious group of individuals, both past and present,” Knight said.

“You could never have told me as a young girl starting my career that I would be honored on a stage such as this, with artists and humanitarians such as these—it just wouldn’t have seemed possible,” she continued. “It would have been the dream of all dreams. I have been blessed with so much in my life, and this certainly stands with those achievements at the top of that list.”

With over four decades of performing under her belt, Knight has achieved feats many musicians can only dream of. Yet, she still sees her latest honors as one of the “highlights” of her decorated career.

“To be honored as a Kennedy Center Honoree is among the highlights of my career. I stand here with my fans, my family, my friends, my team, and my faith in accepting such an amazing distinction,” she said.

“It is dedicated to all those who paved the path for me to be able to accomplish the wonderful blessings I’ve been able to receive. The Kennedy Center’s commitment to the arts is unparalleled, and I am so very grateful for this moment.”