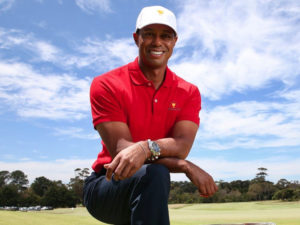 Professional golf champion Tiger Woods is officially a billionaire, according to Forbes magazine.

Woods is now one of only three billionaire athletes in the world, along with basketball greats LeBron James and Michael Jordan.

The 46-year-old athlete has reportedly earned more than $1.7 billion since he began his lucrative 27-year-long career. The majority of Woods’ earnings have not been from his professional golf career. Forbes reported only 10 percent of the golf champion’s earnings came from golf while noting Woods’ made the majority of his money from endorsement deals. Woods had several endorsements from brands such as Rolex, Gatorade, Nike, Monster Energy, and TaylorMade.

Woods has also invested his money wisely and began a new company called TGR Ventures. The company has invested in several businesses including the golf technology training tool Full Swing and PopStroke luxury mini-golf courses. TGR Ventures also has a golf design business, TGR Design, and a production company for live events, TGR Live. The golfer also has a restaurant in Florida called The Woods.

Sports agent Leigh Steinberg said Woods’ good business sense helped to create his vast wealth. “He’s been extremely skillful in taking parts of businesses,” said Steinberg. “In creating their own business, in ways that athletes before them just weren’t.”

Woods was also credited by the former president of CBS Neal Pilson for raising golf tournament television ratings in the early 2000s. According to Pilson, ratings dropped 30 to 50 percent when Woods wasn’t playing in televised tournaments. The “Tiger Effect” also contributed to PGA Tour winnings between 1996 and 2008 almost tripling.

Woods held the number one spot on the list of Forbes‘ highest-paid athletes from 2002 until 2012, and at one time, he earned $100 million annually. Woods is reportedly the 14th highest-paid athlete in the world and earned $68 million in the past year alone. He also recently invested in the NEXUS Luxury Collection of clubs and resorts with golfer Ernie Els, singer Justin Timberlake and fellow billionaire Joe Lewis.