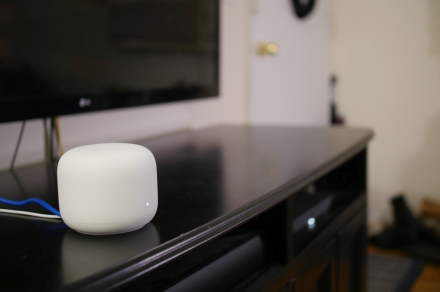 The Google Nest Wifi Pro is expected to arrive soon, and a recent leak suggests that the price has gone up compared to earlier models.

The info comes from B&H Photo, which has dropped some details of the product ahead of Google’s Pixel event, scheduled for October 6. A search for “Google Nest Wifi Pro 6E” returned several results. Those B&H listings have now been removed, but we managed to capture screenshots before they disappeared. The price is shown as $199, $30 more than the 2019 Nest Wifi’s retail price of $169 and $80 more than the current $119 sale price.

B&H also reveals two bundle options: a two-pack priced at $299 and a three-pack costing $399. Four color choices are listed, including Snow, Linen, Fog, and Lemongrass. The two-pack is only available in Snow, while the three-pack has a choice of Snow and multicolor. No photos or other details were shown in these accidental early listings.

The name Google Nest Wifi Pro 6E gives some clues about what we can expect. Wi-Fi 6E is the latest version of the Wi-Fi standard and it adds an extra frequency band to the already fast Wi-Fi 6 specification. This will help in crowded networks that have several phones, computers, and smart devices connected. The “Pro” naming scheme, as 9to5Google points out, suggests that Google might continue to sell the standard Nest Wi-Fi alongside this new model.

Another detail worth noting is the lack of any mention of a Nest Point in the B&H listings. This lower-cost accessory works with the Nest Wifi to expand the range of coverage within your home or office. Even if the Nest Wifi Pro works with the older Nest Point, the latter is a Wi-Fi 5 device and won’t be able to broadcast a Wi-Fi 6 or 6E signal.

With Google’s next event coming in just a few weeks, we probably won’t have to wait long to learn more about the Google Nest Wifi Pro router. If you need a network upgrade sooner, there are some great deals available right now on Google Wi-Fi routers.