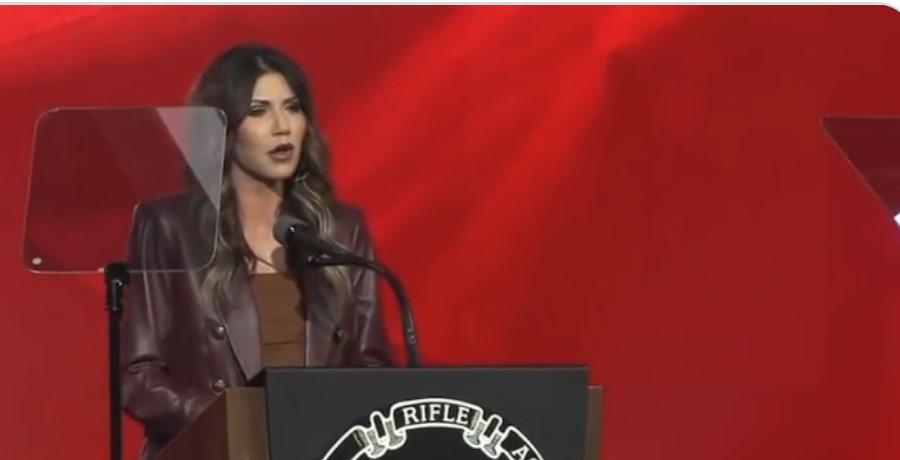 Gov. Kristi Noem (R-SD) said that America couldn’t have gun control because the right needs assault weapons to defend themselves from leftists.

Kristi Noem at the NRA convention says we shouldn’t have gun control because of dangerous leftist protesters: “Woke mobs are tearing down statues .. our Founding Fathers, Catholic missionaries. They even wanted to come after Mt. Rushmore. Not on my watch!” pic.twitter.com/ZZjKEG3ajT

Noem said at the NRA Convention, “Woke mobs are tearing down statues, and it doesn’t matter who they are of. Our Founding Fathers, Catholic missionaries, they even wanted to come after Mount Rushmore. Well, not on my watch.”

Not a single part of anything that Noem said was true. There are no woke mobs coming for Mount Rushmore.

Noem was suggesting that the right needs assault weapons to be able to shoot liberal protesters for disagreeing with them.

The right is willing to kill people on the left who oppose statues of racists and traitors. That is what Noem was suggesting. Gov. Noem is saying that an unlimited Second Amendment is necessary so that political opponents can be shot.

Democracy isn’t shooting an opponent who disagrees with you. There is no such saying as the only way to defend a racist statue from a peaceful unarmed non-violent mob is to shoot them with an assault weapon.

Kristi Noem has proven the critics correct that only the truly deranged would show up at an NRA convention after a mass shooting.

Noem wants to run for president in 2024, and she is apparently trying to corner the right-wing mass shooter vote.