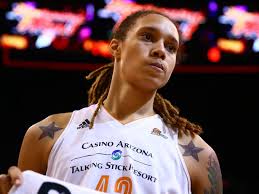 The Phoenix Mercury star entered a guilty plea over a week ago while saying she “didn’t want to break the law.”  The guilty plea aids as a pre-condition for consideration of a negotiated release and possible prisoner exchange between Russia and the U.S.

Griner is facing up to 10 years in prison on the charge of large-scale transportation of drugs. Less than 1% of defendants in Russian criminal cases are acquitted, which can be overturned.

Jakson explains why the WNBA was told not to respond or comment publicly when Griner was first detained. She also shared comments that many people feel Griner is being used as a political pawn. Griner “should not be a political pawn,” Jackson continued. “We are BG,” calling on the Biden administration, what comes next and much more in the clip below.