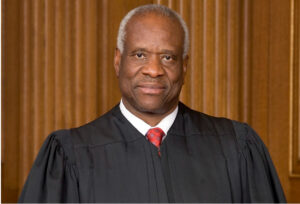 GWU To Retain Clarence Thomas Despite Protests And A Petition

Thomas serves as an adjunct professor at GWU Law School where he teaches a constitutional law seminar. According to CNN, GWU students have been protesting and calling for his termination due to his role in overturning Roe v. Wade and his wife Ginni’s role in the Jan. 6th Capitol Riot.

A campus petition calling for Thomas’ termination has been signed by more than 7,000 people.

“Judge Thomas is actively making life unsafe for thousands of students on our campus (not to mention thousands of campuses across the country),” the petition states.

“Justice Thomas has been a consistent critic of the Court’s legal philosophy on substantive due process for many years,” the email said. “Because we steadfastly support the robust exchange of ideas and deliberation, and because debate is an essential part of our university’s academic and educational mission to train future leaders who are prepared to address the world’s most urgent problems, the university will neither terminate Justice Thomas’ employment nor cancel his class in response to his legal opinions.”

Despite GWUs stance, student groups on campus plan to continue protesting Thomas’ presence at their school and emailing Bracey and Matthew about their concerns.

“It is not acceptable for Judge Thomas to be teaching students who he does not respect and does not believe have the same rights as straight people or the minority of men on campus,” Jon Kay, a GWU student who created the petition, said in an interview with CBS affiliate WUSA.

“This isn’t about ideological agreement,” Kay added. “It’s about a teacher having respect for his students.”