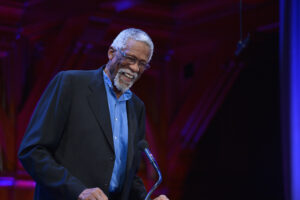 Bill Russell, one of the greatest basketball players of all-time and a civil rights icon, will have his jersey number retired across the entire National Basketball Association (NBA).

The news comes after Russell died on July 31 at the age of 88.

The NBA and NBPA announced today that they will honor the life and legacy of 11-time NBA champion and civil rights pioneer Bill Russell by permanently retiring his uniform number, 6, throughout the league.

The 11-time NBA champion and first Black NBA head coach, is the first to have his number retired across the NBA.

“Bill Russell’s unparalleled success on the court and pioneering civil rights activism deserve to be honored in a unique and historic way,” said NBA Commissioner Adam Silver in a written statement. “Permanently retiring his No. 6 across every NBA team ensures that Bill’s transcendent career will always be recognized.”

The upcoming 2022-23 NBA season will see teams throughout the league celebrating and acknowledging the NBA great.

Every NBA player will wear a commemorative patch on the right shoulder of their jerseys, while all NBA home courts will display a clover-shaped logo with the No. 6 on the sideline near the scorer’s table. Russell played his entire career with the Boston Celtics; the team plans on honoring him in special ways throughout the season.

“This is a momentous honor reserved for one of the greatest champions to ever play the game,” said NBPA Executive Director Tamika Tremaglio. “Bill’s actions on and off the court throughout the course of his life helped to shape generations of players for the better and for that, we are forever grateful. We are proud to continue the celebration of his life and legacy alongside the league.”

Players currently wearing No. 6 will be grandfathered, including future Hall of Famer, LeBron James.