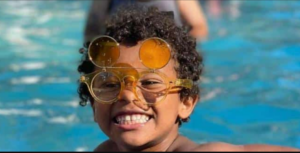 According to People, a 7-year-old boy’s community is hailing him as a hero after he rescued a toddler from drowning in a pool.

The incident occurred at an apartment complex pool in Sacramento, California, where Massiah Browne noticed a small child at the bottom of the pool, ABC News reports.

“I was just playing in the pool, and then I saw a boy at the bottom of the pool,” Massiah said, adding that he told his 9-year-old relative, Savannah, who instructed him to retrieve the distressed child, KTVB reports.

Massiah said the 3-year-old had his mouth and eyes open. He swiftly grabbed the child’s arms and pulled him to the pool’s surface, where Savannah hauled him to the deck.

Massiah told his mother, Tiara Delvalle, about the crisis, and she quickly came to the child’s aid along with other family members who contacted the authorities, according to People.

A Sacramento Fire Department spokesperson confirmed the child was breathing when the medical workers arrived, and the toddler was transported to the nearest hospital in critical condition, “with advanced life support efforts provided by Sacramento firefighters,” the department said to ABC News.

Massiah’s mother, Delvalle, received uplifting news from the 3-year-old’s mother that he is recovering, according to People.

Former Olympic boxer Marcus Browne, the father of the heroic little boy, said he “couldn’t believe” the life-saving efforts of his son, who he described as “a good kid.”

Drowning in the U.S. is the primary cause of death for young children between the ages of 1 and 4 and the second leading reason for death for children up to age 14, based on reports by the Centers for Disease Control and Prevention, according to ABC.