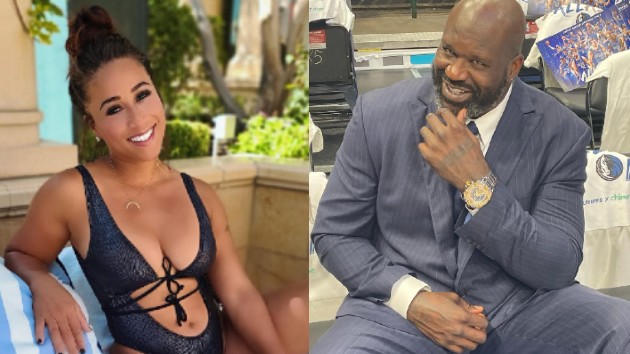 Hoopz Has Fans Mesmerized With Cheeky Video Celebrating Her 40th Birthday, Leading Some to Bring Up Her Ex Shaquille O’Neal

TV personality Nicole “Hoopz” Alexander recently had the internet buzzing after showing off her impressive skills on social media. The actress celebrated her 40th birthday on Wednesday, July 13 by sharing an epic video of herself doing flips and cartwheels up and down a hotel hallway in a green dress. In between the gymnastics, a drunken Hoopz showed off her ballerina skills, flexing her pointed toes after attending a Cirque du Soleil show in Las Vegas.

“Flippin’ into my 40s like,” she added to the video on Twitter and Instagram. “I had the best time in Vegas with some of my best friends, and by far the funnest thing we did was go to see one of the shows!! See you Vegas.”

She continued, “On to the next city. Ps. Don’t be surprised if y’all see me next in a Cirque show.”

Hoopz continued flipping in the hallway despite revealing the bottom half of her body and her nude thong. “My butt,” the Detroit native said while laughing into the camera. The video also featured footage from a male showcase and other photos of her friends and family.

Fans on social media enjoyed the acrobatic performance, including hundreds on Instagram who told Hoopz “Happy Birthday.” Many were shocked to know she turned 40 and mentioned how beautiful she was. One person tweeted, “I’m ashamed I forgot how gorgeous this woman is.”

Im ashamed I forgot how gorgeous this woman is

But most couldn’t help but bring up her ex-fiancé Shaquille O’Neal. “I see what Shaq saw,” wrote another individual.

Another tweeted, “I know for a fact Shaq was getting the best rides of his life from Hoopz.”

I know for a fact Shaq…