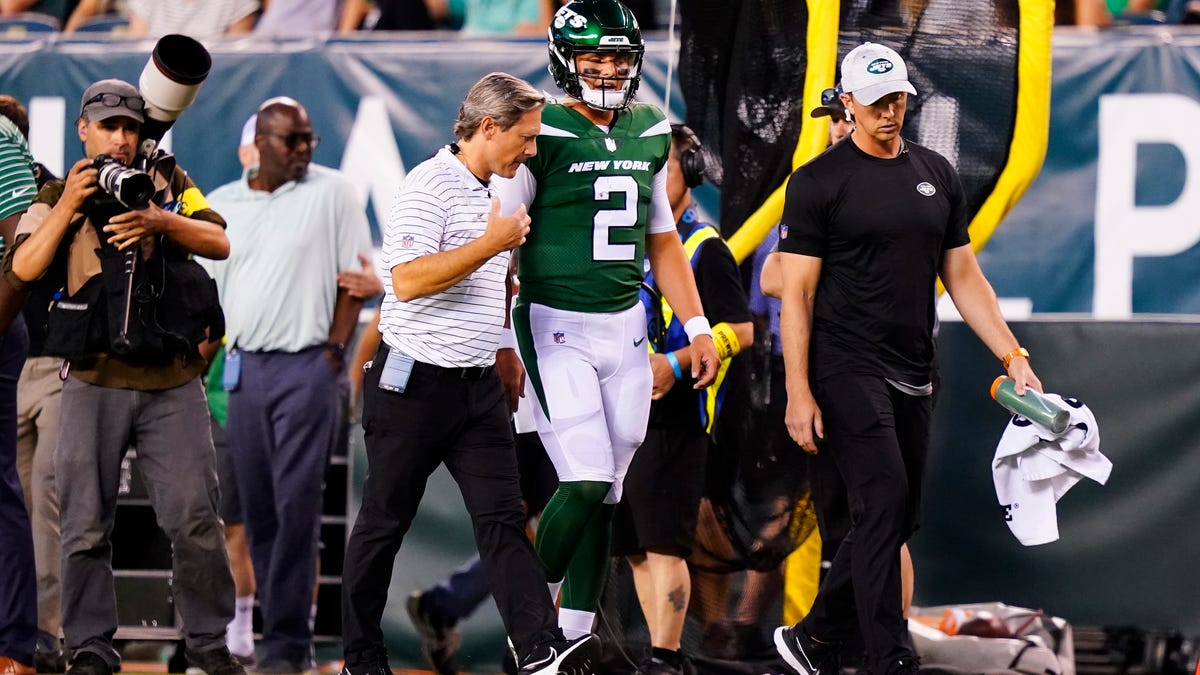 Hope your Friday night was better than Zach Wilson’s

Zach Wilson was injured during the Jets preseason gamePhoto: AP

Zach Wilson may have avoided serious disaster after leaving Friday’s preseason game with a pronounced limp from a non-contact injury. Head coach Robert Saleh said the franchise’s young quarterback will undergo an MRI today, but sources are saying he reinjured his PCL and could miss only a few weeks.

There’s not much to take away from the exhibition against the Eagles other than to ask, what’s the point of the preseason? Jalen Hurts took a late hit in the game, and Philly coach Nick Sirianni rightfully lost his shit.

The only good that came out of Friday’s slate was Deshaun Watson finally apologized to the women he “impacted”/scarred for life. The Jacksonville crowd didn’t seem to care though as they booed him throughout his three series of action and chanted “You sick fuck.”

The new Browns starter completed one pass for seven yards, but more importantly, he didn’t burst into flames as karma intended.

Bill Belichick was supposedly heated after the Giants repeatedly blitzed the Pats in their warm-up for the regular season earlier this week.

Apparently, Brian Daboll hasn’t been told he only gets one blitz every 10 downs, and after that, it’s a three Mississippi count until they can pressure the QB.

Aaron Rodgers isn’t playing in any of the Packers games because he sees no benefit, and as much as it pains me to agree with a guy who microdoses, he’s right.

There’s zero gained from a glorified practice. Teams have an idea of who they’re going to cut, and the only real drama about letting loose a largely unknown player comes from a neatly packaged storyline on Hard Knocks.

The sole reason I’m writing about it is that I need content for this post — which I guess counts as another pro for the preseason. So there we have it. Sports blogs and an opportunity to deliver an apology that should’ve been issued months ago, are the only benefits of the preseason.