BREAKING NEWS
GMT-4 02:32
Home Technology How astronauts on the ISS are growing crops without soil 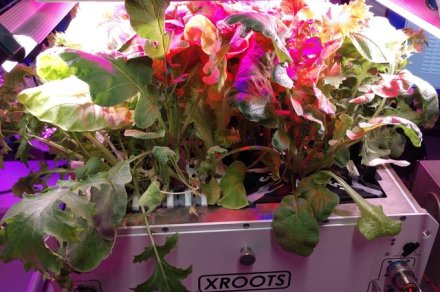 How astronauts on the ISS are growing crops without soil

In order to enable long-term space missions, it’s important for astronauts to be able to grow their own food — for both their physical and mental health. There are a number of experiments into growing crops on the International Space Station (ISS), but recently astronauts there have been harvesting from an unusual setup: one which uses no soil.

Other systems for growing crops on the ISS typically use growth media such as clay-like materials in place of soil to allow plants to grow. But the XROOTS system uses no growth media at all, but uses using hydroponic (water-based) and aeroponic (air-based) methods instead. This is important because growth media or soil can be messy and hard to maintain, and could be potentially unsanitary.

Standing for eXposed Root On-Orbit Test System, the XROOTS system was delivered to the ISS in February this year and integrated into the station’s Veggie system. This week astronaut Jessica Watkins began the process of harvesting radishes and mizuna greens from XROOTS on Friday, June 24.

The XROOTS system is a technology demonstration, meaning it is designed to test out various options for growing plants without soil. It has multiple chambers which can be used at the same time to try out different options for air-based and water-based systems. The hardware also allows researchers to take images and video of the plants as they grow, including their roots, so their development can be checked.

Similar hydroponic or aeroponic systems are commonly used to grow plants on Earth, but there are some difficulties in adapting the technology for use in space. That’s mostly because of the problem of gravity. Without Earth’s gravity, plants can grow strangely…