BREAKING NEWS
GMT-4 08:13
Home Technology How to watch first launch of a European rocket on Thursday 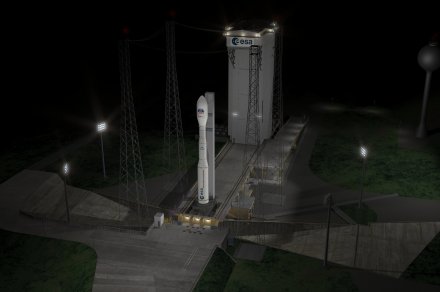 How to watch first launch of a European rocket on Thursday

This week, the European Space Agency (ESA) will launch its new rocket, the Vega-C, on its first flight. An update to the previous Vega rocket, the new version has a mass of 210 tonnes at liftoff and provides a thrust of 4,500 kilonewtons (kN), meaning it can carry around 800 kilograms more payload than its previous version.

The inaugural flight of the Vega-C is set for Wednesday, July 13, at 7:13 a.m. ET (4:30 a.m. PT), in a mission called Flight VV21. The launch will take place from Europe’s spaceport at Kourou in French Guiana, located on the northern Atlantic coast of South America. The launch will be livestreamed by ESA, and we have the details below on how to watch.

The new rocket will be used to deliver seven payloads into orbit, with one larger satellite called LARES-2 and six smaller CubeSats. LARES-2 is a scientific research satellite from the Italian Space Agency which will investigate a phenomenon called the frame-dragging effect. This effect is caused by distributions of mass and energy which distort space-time, as described by the theory of relativity.

The six CubeSats are from European countries including Italy, Slovenia, and France, and will be used to investigate topics like detecting biomolecules, growing plants in microgravity, and gathering data on Earth’s magnetosphere.

To carry these payloads, the new rocket requires changes to the launch configuration from the previous Vega rockets. “Vega-C features major enhancements from Vega, both in the rocket and its ground infrastructure,” said Renato Lafranconi, Vega programs manager, in a statement. “We’ve developed a new configuration with significant changes to many features of a proven concept, but the goal is to deliver major improvements in performance and competitiveness.”