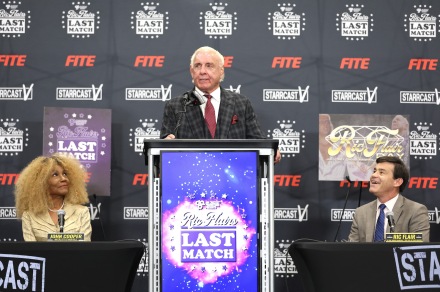 How to watch Ric Flair’s The Last Match live tonight

Ric Flair is a household name for WWE fans, and at 73 years old, he is making history by stepping into the ring one last time. Tonight, July 31 at 7PM ET, you can tune in live to watch Ric Flair’s final match, live from the Nashville Fairgrounds in Nashville, Tennessee. This match is nothing short of a once-in-a-lifetime event, and whether you’re a casual fan or a WWE fanatic, you definitely won’t want to miss it.

Universally recognized as one of the greatest professional wrestlers in WWE history, Ric Flair has earned the title of World Heavyweight Champion an impressive sixteen times. He’s been inducted twice into the WWE Hall of Fame, and is also a member of the National Wrestling Alliance Hall of Fame and Professional Wrestling Hall of Fame. His record and accolades are unmatched, and his fifty-year career is the stuff of legends.

In this must-watch event, Ric Flair will team up with his son-in-law, Andre El Idolo in a match facing off against Jeff Jarrett and Jay Lethal. Tuning in doesn’t mean just watching another wrestling match, it means being a witness to a piece of wrestling history. If there’s anything that can be said about Ric Flair, it’s that when he’s in the ring, he does not disappoint.

So, how can you watching this event live from your living room? Great question. Fite TV will be broadcasting the event in real time via Pay Per View. All you have to do is head to Fite’s website and pay $34.99 to unlock not only the main event, but several other can’t-miss matches. Split between a group of friends, you can watch Ric Flair’s last bout in the ring for only a few dollars, which is seriously a small price to pay to be part of this special event.

Other matches happening tonight include the Impact World Championship match between Josh Alexander and Jacob Fatu, the Impact Knockouts World Championship match between Jordynne Grace, Deonna Purrazzo, and Rachael Ellering, The Wolves versus The Motor City Machine Guns, and The Von Erichs versus The Briscoes, just to name a few.

This is your one and only chance to watch Ric Flair’s last match, and you can tune in live via Fite…