BREAKING NEWS
GMT-4 08:07
Home Technology How to watch rollout for NASA’s biggest launch of the year 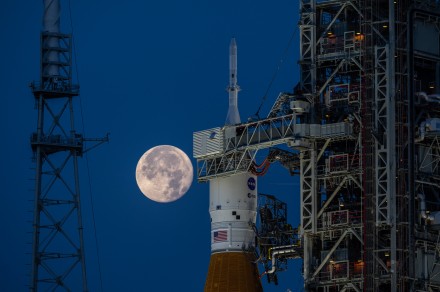 NASA is gearing up for its biggest launch of the year: The Artemis I mission, which will send an uncrewed spacecraft into orbit around the moon and return it back to Earth ahead of future missions to bring astronauts back to the moon. Before any astronauts blast off, however, NASA needs to test its new rocket (the Space Launch System) and new capsule (Orion) to ensure that they are safe and ready to carry people.

Artemis I will launch from Launch Complex 39B (LC-39B) at the Kennedy Space Center and make a flyby of the moon, collecting scientific data as well as testing out the new technology. The launch window for the mission is set to open on August 29, and the agency will be livestreaming the whole launch event. But the preparations for the launch are already beginning this week, with the enormous 320-foot-tall Space Launch System rocket being rolled out to the launch pad on Thursday, August 18.

A full Moon in view on June 14, 2022, behind the Space Launch System and Orion spacecraft atop the mobile launcher at Launch Complex 39B at NASA’s Kennedy Space Center in Florida. The rocket and spacecraft are undergoing final preparations for launch. NASA/Ben Smegelsky

NASA is also working on final preparations for the launch, with the rocket currently located in the Vehicle Assembly Building at Kennedy. This includes testing the system which can terminate the launch in the case of an emergency, called the…