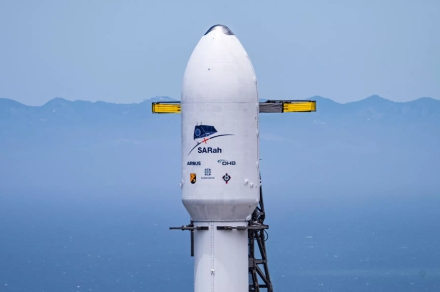 How to watch SpaceX launch a German radar satellite today

This morning, SpaceX will be launching a German radar satellite using one of its Falcon 9 rockets. The company will be livestreaming the launch, so you can watch along at home, and we’ve got all the details on how to watch below.

The launch is scheduled for 10:19 a.m. ET (7:19 a.m. PT) on Saturday, June 18, to take place from Space Launch Complex 4 East (SLC-4E) at Vandenberg Space Force Base in California. The weather is looking clear for the region this morning, so the likelihood is high that the launch will go ahead. But if there are weather issues, there is another opportunity for launch on Monday, June 20.

The Falcon 9 rocket will carry a satellite called SARah-1 into orbit. The satellite was built by German company Airbus for the German military as part of the SARah system. The system, a replacement for the current SAR-Lupe system, will consist of three radar satellites and a ground segment, with the other satellites to launch later. The radar satellites are for observing the Earth from space and generating satellite imagery.

“The radar instrument developed and built by Airbus features a sophisticated active phased array antenna and represents a further development of the Airbus-built TerraSAR, TanDEM-X and PAZ Earth observation satellites already successfully operating in orbit,” Airbus writes. “This technology offers the advantages of very fast pointing and very flexible shaping of the antenna beam to deliver imagery in record time.”

The launch will be livestreamed, as is typical for SpaceX launches. The livestream will include final preparations before liftoff, liftoff itself, the separation of the first and second stages, and the landing of the first stage booster. This particular booster has been used before on two missions, the NROL-87 and NROL-85 missions.

Coverage will begin around 10 minutes before liftoff, at just after 10 a.m. ET (7 a.m. PT). You can watch either by heading to SpaceX’s YouTube channel or by using the video embedded at the top of this page.